Thought I would share with you something I have discovered about ‘Facial Features’ while drawing Portraits. Although almost everyone has a unique appearance, there are also huge similarities amongst the face of each person (probably some rare exceptions).

So while drawing Portraits I have found a general rule to help with getting the features of the face in roughly the right places, then you can tweak them at a later time as the drawing progresses.

For this short Tutorial, I will use a very old sketch of mine of my Mother as an example, and a more recent Drawing of a famous Band to show examples of how the general rule varies. 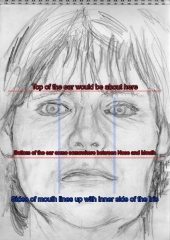 As you can see I have marked with red lines where the TOP and BOTTOM of the ‘Ear’s meet up with the ‘Eye Brows’ and ‘Nose’. The rule is the TOP of the ‘Ear’ will come somewhere between the ‘Eye Brow’ and the ‘Eye Lid’, and that the BOTTOM of the ‘Ears’ will always land somewhere between the Bottom of the ‘Nose’ and Top of the ‘Mouth’. Reason for the variation is because if someone has their head tilted backwards, then the ‘Ears’ will appear lower, but if someone has their head tilted forward the ‘Ears’ will appear higher. So it is all about the perspective, your view point of the subject at the time. But if you are looking at someone dead on. The ‘Ears’ will almost always be dead in line with the ‘Eye Brow’ and Bottom of ‘Nose’. (see ‘Rascal Flatts’ for an image showing some variances of placements)

It has been brought to my attention by a visitor ‘Chris Condrup’ that the Human ‘Ears’ and also ‘Nose’ continues to grow with age, however by only a small amount. But this can have an impact on drawing the ear positioning of older people. So for older people it might be wise to draw the ear nearer to the eyebrow and upper lip 🙂 – thank you ‘Chris Condrup’.

So there is also a rule for ‘Mouths’. If you look at my Mother again, see the blue lines. The edges of the ‘Mouth’ almost always line up with the inner portion of the ‘Iris’ of the ‘Eyes’. This is the part of the Iris nearer to the ‘Nose’. This rule almost never fails so is an easy one.

3. Lets talk about Size of the NOSE (I did no markings on drawings for this rule)

This rule can often have exceptions, but is a good starting point. Look at the bottom of my Mothers ‘Nose’. The width of it lines up perfectly with the inner corner of the ‘Eye Slit’, where the top and bottom eye lids meet up (nearest to the ‘Nose’). Use your imagination to visualize a line. Also look at the ‘Rascal Flatts’ drawing and see the man on the right hand side (no.3). The same rule is applied to him. Sketch the ‘Nose’ out to this rule and just re-size it later if need be.

So, if you follow these three rules when sketching out a template to start a new drawing. Get the ‘Ears’ and ‘Eyes’ and ‘Nose’ to line up in approximately those places then it will help you achieve far greater accuracy later in the drawing. Just remember to adjust the ‘Ears’ slightly depending on your viewpoint of the subject you are drawing!

Hope this helps you.